From 37 weeks pregnant, I spoke to my midwife about harvesting colostrum which is basically ‘milking yourself’ before you give birth and collecting the thick, sticky, golden liquid that comes out. Sounds gross but its really not that bad compared to how gross giving birth is…

I watched YouTube videos on how to do it, got my kit from my midwife, read so much online for top tips and decided I’d give it a go one Sunday night. One thing I had read was not to be disheartened if nothing came out on the first few tries. I had friends who just started leaking it from 25 weeks pregnant but that didn’t happen for me, which I’m quite glad I didn’t start leaking to be honest.

So I had a bath, sat myself on the sofa and massaged my boobs well before starting to actually milk myself. That first time I got 0.1ml of colostrum into the syringe, the hardest part was probably getting it into the actual syringe but I was so pleased. That pleased I facetimed my mum and my sister to tell them that I had successfully milked myself.

From that first time of doing it, I did it 3 times in that week then never did it again. I wasn’t really doing it to stockpile, it was more in case I couldn’t breastfeed I could have given her something in that first day before having enough expressed milk to give her and also just to see if I could with the added benefit that nipple stimulation can help bring on labour (wasn’t the case for me).

In total, I had about 3×0.25ml syringes in the freezer but I’d recommend having more stocked up, the benefits for baby are great.

Breastfeeding was not the one for me. My mum always talked about how it was such an amazing bonding experience to have with your baby but for me it was nothing like that.

In hospital after giving birth, the midwife asked if I wanted to breastfeed, I had no idea what I was doing so asked for some help. She basically plonked baby on my boob in one position and left us to it. Aurora fed for less than 5 minutes and never fed again for the 14 hours we we were in hospital. I asked the midwife who was looking after us on the ward if she should be feeding more and that I would have liked a bit more support and she just brushed it off and talked about how much she should be feeding when she’s a few days old, not now.

I left the hospital without any real clue on how to breastfeed my baby because that first feed was at 2am and a total blur.

The next few days were awful for feeding. Each feed was painful, my milk supply came in pretty quickly but I dreaded every feed. I had 2 midwives visit to do the general checks on Aurora day 1 and day 5 after birth. They both saw me feed her and said that her latch was good and to maybe try some different positions.

I went online, watched a few videos and tried a few but I still found every feed excruciating. She favoured my left boob and my nipple ended up cracked and bleeding after 2 days, I got some nipple shields and they did help my nipple to heal but the feeds were still painful. I persisted with breastfeeding, different positions hoping that at some point it wouldn’t hurt any more.

I expressed 2 bottles daily (using my hakka to catch the ‘let down’ when feeding and my electric pump) for Kieran to feed her while I got 5 hours of unbroken sleep each night, this helped to give my nipples a break and also helped us know she’d happily take a bottle. I think in total I had 4 feeds in 2 weeks that didn’t hurt but when she was feeding 10 times a day that wasn’t great odds. 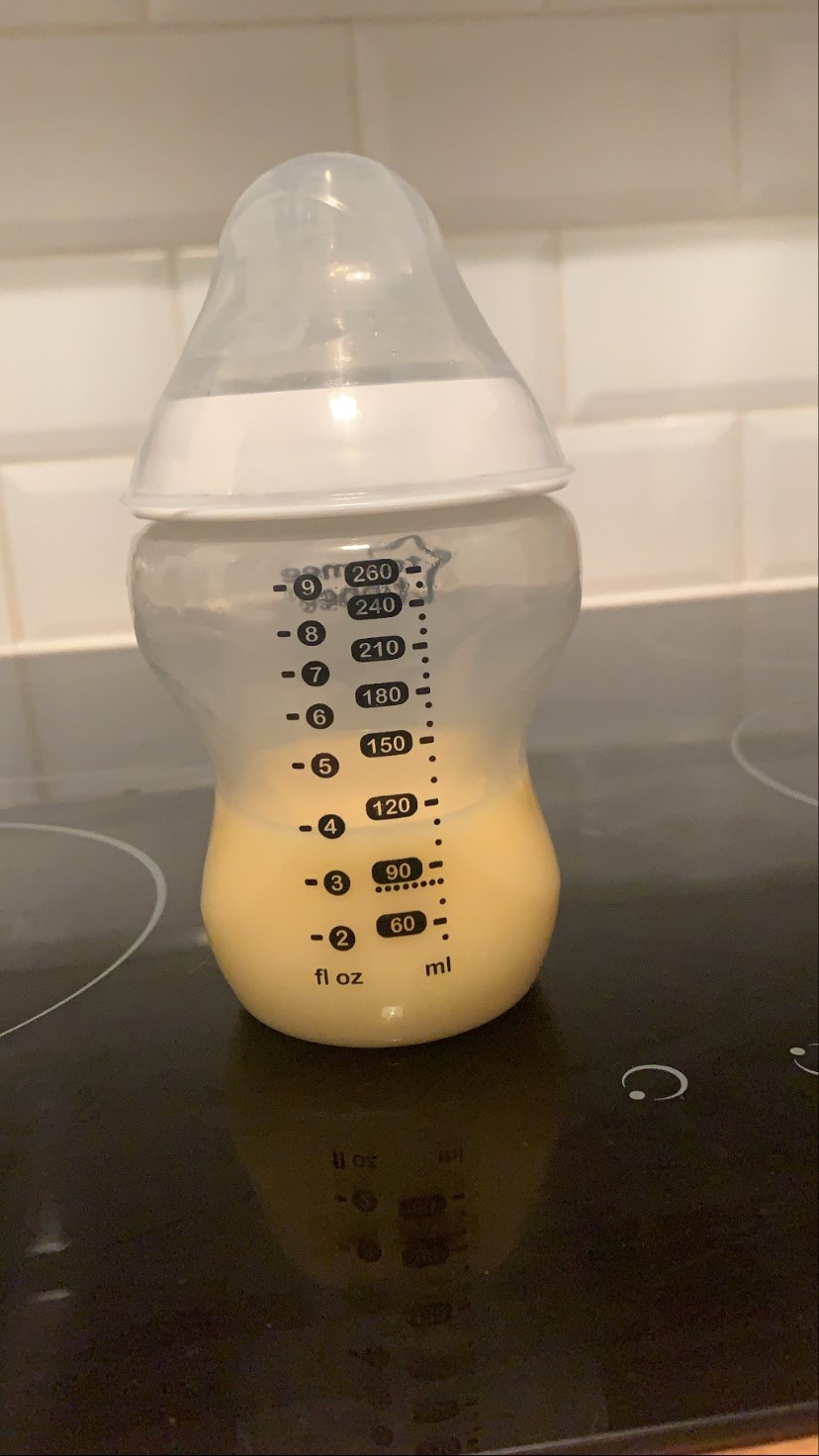 We’d discussed changing her onto bottles permanently expressing what I could and topping up with formula but the thought of doing that made me feel like I’d failed. I’d put all this pressure on myself to breastfeed when I needed to accept it just wasn’t for us. So one night feed enough was enough, I decided that she was going onto bottles and no more boob. I cried when I made my decision but I also felt like a weight had been lifted off my shoulders.

You should never dread feeding your child and now I do feel more of a bond when I feed her because I can focus on her rather than concentrate on the pain I’m in. I expressed as much as I could so she was still having my milk only stopping expressing when my milk supply went down which was another 2 weeks after changing to bottles so she’d had 1 month of my milk and I was happy with that.

When she was 2 weeks old we had our health visitor come to weigh Aurora and do the usual checks. She asked about feeding so I told her my journey with it so far and that we’d made the decision to go onto bottles. My health visitor said she would do some extra checks on Aurora’s mouth to see if she found anything that could of been effecting the feeds and turns out Aurora has a shallow palate which means I couldn’t get a deep latch and she was clamping my nipple in the front of her mouth which is why it was so painful. She did recommend a feeding position that could help which was the upright feeding but that is probably the most impractical position and there is not guarantee that it wouldn’t hurt.

Even though we had made the decision to stop before we saw the health visitor having her give us an actual reason that it hurt that we couldn’t change made me feel so much happier and not that I’d just given up because it was too hard.

I’m glad I tried breastfeeding, I wish I’d had more support in the first week but with covid restrictions it just wasn’t possible.

One thing I’ve learnt is that everyone’s feeding journey is different and there is no right or wrong when it comes to breast or bottle, you feed your baby however you want to and enjoy it. Feeding your baby will sometimes feel like a chore especially at first when they want to feed what feels like constantly – but once you get into the rhythm of your day to day life you’ll appreciate that moment when they are happy and your getting some nice snugs while they chow down.

Thanks to Pip Brierley ‘Aurora’s Mama‘ for sharing your feeding journey with us. You can follow her on instagram HERE.

Get Ready For Rainy Day Adventures!

Hey YOU! Yeah you, sippin’ your wine, giving yourself a hard time about how your days been.